This shirt has some curious story! It's coming directly from Jordan (well, really from Dubai cause was sent from there, but I meant that it's JFA who sent me!), thanks to mr Mohammad Al-Ayasrah and Osama Talal Sabbah.
The jersey is the model used in latest Asian Cup qualifiers, but has the WC patches on the sleeve. However, the model used for WC qualifiers had the number on the chest under the Adidas logo and not in the center like in this shirt. So what?? Checking it I could spot some glue and sign of older patches under the WC ones, so probably this shirt was used by number 6 (usually Saeed Al-Murjan), lost its original patches (just look the pic below and you'll see some "flying patch" :D ) and someone, maybe the kitman himself, put on the old WC patches to make it look nicer :P Anyway it's a great addiction indeed! 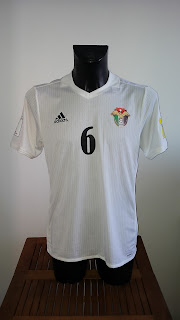 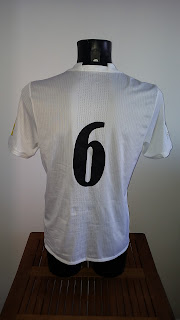