This is rather historical jersey for Saudi Arabian football. It's in fact from the match vs Japan (05.09.2017 in Jeddah, number 6 was Salem Aldawsari), and the 1-0 at the final whistle meant for the Green Falcons their come back to the World Cup after missing it since Germany 2006! The shirt had been provided by a member of the old staff, which was incredibly changed after qualifying for the World Cup! Absurd!
Don't ask me why, but the patches faded, maybe in the sun! the usually yellow one become white, but even the other one lost some of his bright colours! 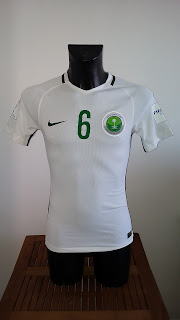 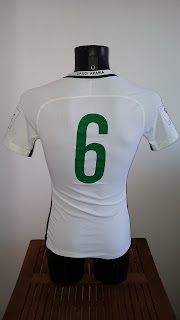 Aggiungi commento
Carica altro...
Post più recente Post più vecchio Home page
Iscriviti a: Commenti sul post (Atom)
None of the jerseys present here is for sale, I consider it a form of respect towards the players and to those who helped me to have them. I could maybe consider swapping, only for those I have at least double.